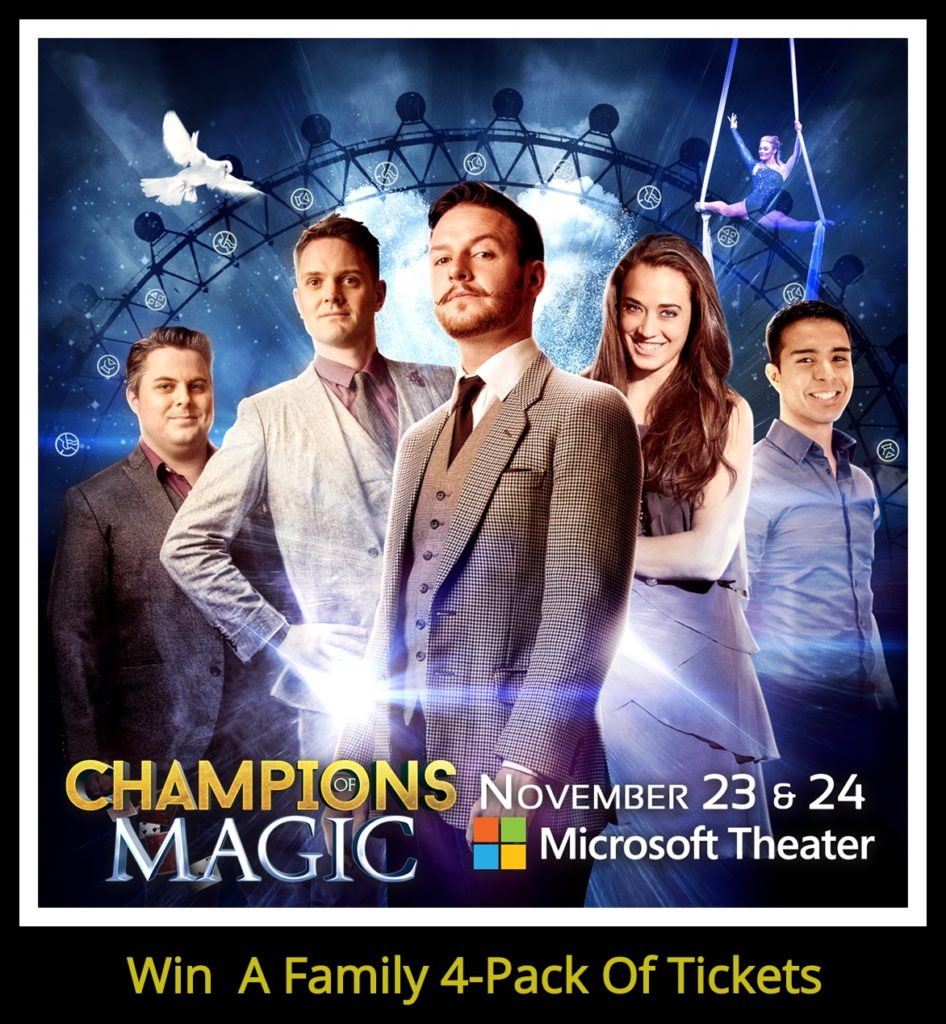 Hold onto your jaws because they are about to drop. You have never seen magic quite like The Champions of Magic! This family friendly entourage performs daring escapes, unbelievable mind reading and spectacular stage filling illusions! Don’t miss your chance to fill your child’s world with wonder!

Following in the footsteps of Downton Abbey, John Oliver and James Corden, the latest British sensation to hit our shores is the Champions of Magic tour.

The five world-class illusionists that make up this mind-bending theatrical production are coming to Los Angeles for the very first time, following sell out shows, rave reviews and a run in London’s West End. Catch this incredible show for the whole family in a very limited three-performance engagement at The Microsoft Theater. Tickets start from just $24.50!

With more than 20 million online views between them, this cast of top magicians includes international award-winners presenting incredible mind reading, stunning close-up magic and daring large-scale illusions. Their skills have been seen around the world on TV with appearances on The CW’s ‘Penn & Teller: Fool Us’, and NBC’s ‘Caught on Camera with Nick Cannon’, ‘The Today Show’ & ‘Access Hollywood’.

The Champions Of Magic team present incredible illusions with supercars, an impossible escape from Houdini’s water torture cell, a mind-blowing prediction that has to be seen to be believed, levitation high above the stage and a finale beyond explanation. The show features original magic that can’t be seen anywhere else.

Described by the British Press as “a spectacular family show” (Heart FM) and “slick, clever, funny and amazing,” (Hereford Times) Champions of Magic has been seen by tens of thousands across the UK and North America – now’s your chance to see why fans return to see one of the world’s biggest touring illusion shows time and time again.

The Champions of Magic schedule in Los Angeles is as follows:

Don’t miss your chance to catch some of the greatest magicians on the planet in Los Angeles with a show that never fails to amaze.

US Residents Only. No purchase necessary to enter. All readers have an equal chance to win, however, you must enter to win. A winner will be randomly selected via RaffleCopter and notified via email. I will attempt to contact the winner for 3 days. If the winner cannot be reached by email, a new winner will be selected the same way. There are several different ways to earn entries. One prize per household. The winner will receive, free of charge, the prize mentioned above. This prize has no cash value and is not available for exchanges. Prizes are not transferable or refundable and must be accepted as awarded. The winner is responsible for any and all other costs and expenses not listed above. Not liable for unclaimed prizes or fulfillment.