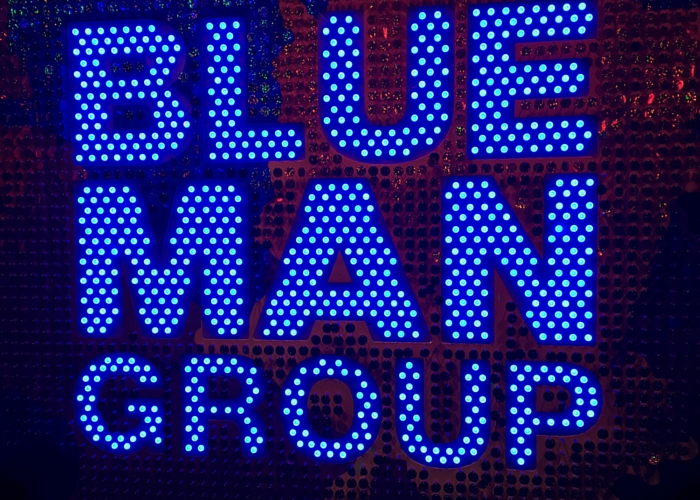 I recently posted about my interview with the Blue Man Group and I also wanted to share about just how much fun this show is! The show is meant for all ages and designed to be a multi-generational entertainment experience, however, it is best for children ages 3 years and up due to the percussive music, movement of the performers/props in the auditorium and as a courtesy to other patrons. 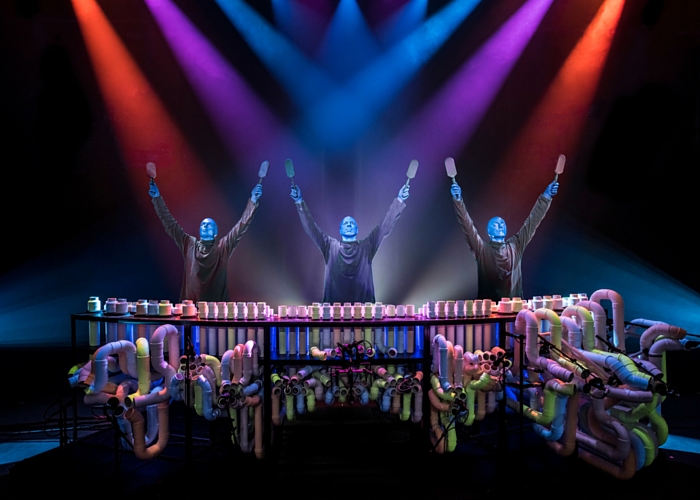 Blue Man Group is comedy, theater, rock concert and dance party all rolled into one. You’ll be closer to the action than ever before at the specially designed Blue Man Theater at Luxor Hotel and Casino.  It’s an outrageous multi–sensory experience you’ll never forget. New music, new design, new technology and a new finale to bring the entire audience together for a euphoric celebration of life in full color.

This show is a visual and audial party for your brain. I took my 3 kids and husband and I don’t think any of them stopped smiling for the entire length of the show. Before the show starts, there are scrolling LED boards  on each side of the stage that give the audience hilarious instructions. During this time staff will hand out pieces of tissue paper that you tear off and wear on your head. It was a great way for the audience to participate and small hint at what was to come.

There are 3 Blue Men and 5 band members, but no one talks. The entire show is done with incredible eye and body movements, gestures, the power of suggestion, elaborate props, tons and tons of tissue paper, confetti and most of all outstanding music made from PVC pipes and giant drums. 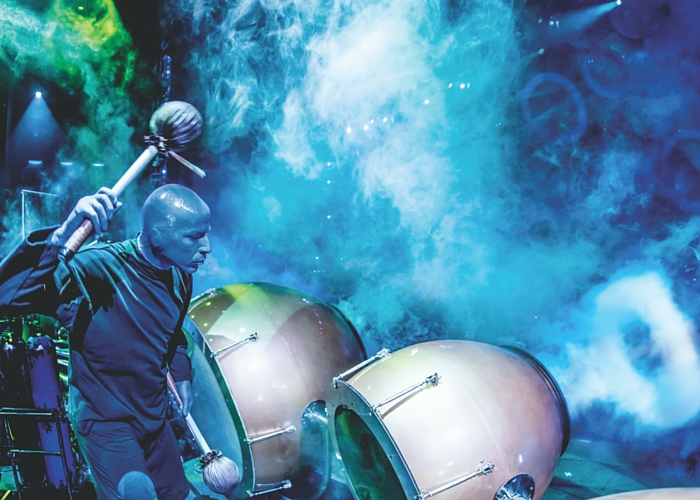 During one part of the show they bring out kettle drums that laugh huge smoke rings over the audience. It is so neat to see.

PVC tubes are still used to make music.  Paint is still spattered.  The finale is an explosion of audience participation, filled with toilet paper, smoke rings and huge, glowing balls!  And your hosts are still the silent, stoic, silly, and inventive Blue Men.

Audience participation is a big part of the show. There is a section in the show where the Blue Men walk out into the audience and literally walk on your seats, over your head, pace, and stare at you. When they find the person they want they bring them up for this epic Twinkie Skit that will have you rolling. Without giving too much away lets just say it was incredibly messy, and since a lot of it is improv it is absolutely hilarious! 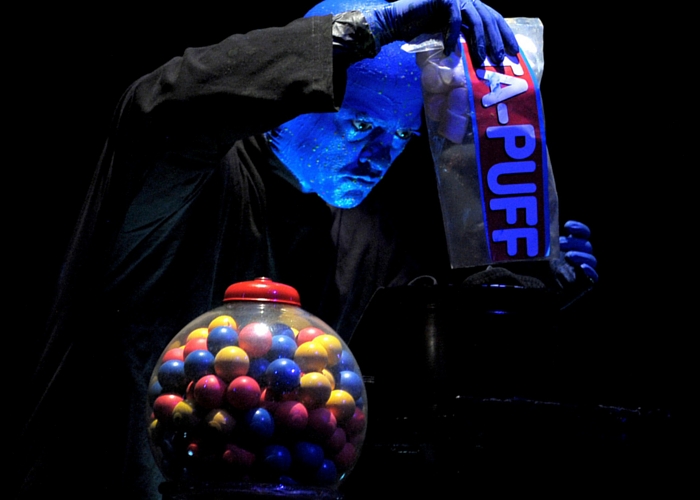 If you think juggling is a cool talent, then wait until you see marshmallow tossing. These guys can stuff about 33 specially made marshmallows in their mouth while the marshmallows are speeding towards them at high rates of speed. But that is not all! See those gumballs in the picture? They are actually paintballs. One Blue Man can catch paintballs in his mouth and spit out a beautiful painting on canvas. It is unreal!! 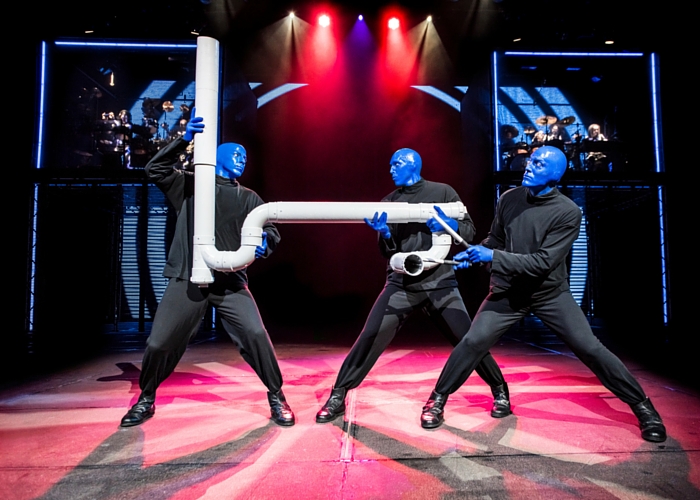 The Blue Man Group uses instruments of various sizes to create music. PVC pipe bellows. Drums pop and sizzle. The music in a Blue Man show pushes the boundaries of standard musical principals and conventions. Some of the pieces are very simple and some of them are so intricate you won’t believe your eyes. Either way, you will be tapping your feet or clapping your hands because the music is addicting. 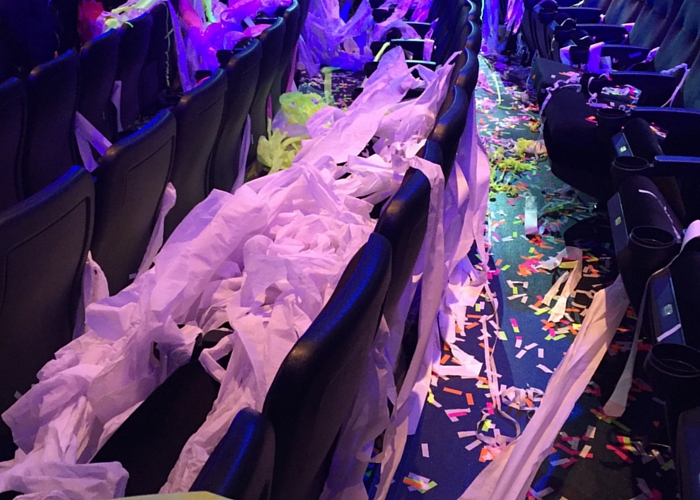 Remember how I told you they pass out tissue paper to make headbands with, in the beginning of the show? Well, that was a hint that there was more tissue paper to come. Like boat loads more. Towards the end of the show there is a giant dance party with massive amounts of tissue paper and confetti starting from the back all the way to the front. By the time the show ends you will be wrapped in it. This picture doesn’t even show half of the fun! 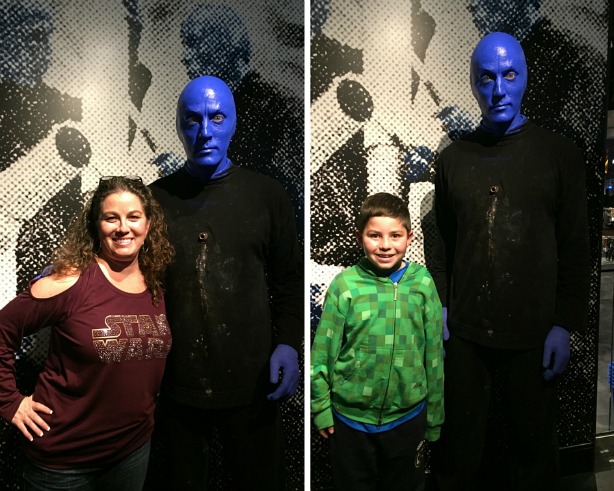 One of the coolest thing that the Blue Man Group does is pose for pictures with everyone after the show. They are so efficient and the line moves really quickly. You can also take a picture with the band too! I want to scream from the rooftops how much I love this show and I hope that you will all have a chance to see it yourself! Click here to see what cities they perform and let me know personally how you liked it!