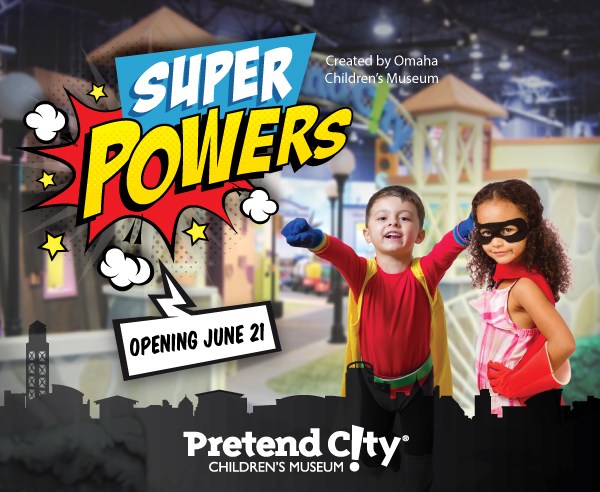 Pretend City’s has a new summer exhibit, Super Powers, created by Omaha Children’s Museum.  Starting June 21, 2016 kids can play on a zip line, ropes maze, wind tunnel, and much, much more.  Guests will be able to test their courage and bravery while accomplishing missions and earning badges toward their “Superhero ID”.

Dress As a Superhero for $1 off admission

As part of our Superhero Summer, we’re discovering and strengthening the inner superhero in everyone all the way through September. Every week at Pretend City, we’re celebrating superheroes and providing special appearances by superheroes themselves! Anyone who whooshes into the museum dressed as a superhero during these weeks will receive $1 off admission to the museum. In addition, we’re also highlighting real-live heroes that show bravery and courage every day to keep us safe. The following weeks are geared to spotlight different real-live heroes and teach our guests a little bit more about them:

*$1 off to those who come in medieval attire

*$2 off admission for those who come dressed in Military Heroes

US Residents Only. No purchase necessary to enter. All readers have an equal chance to win, however, you must enter to win. A winner will be randomly selected via RaffleCopter and notified via email. No cash value. Winner will have 48 hours to claim their prize or a new winner will be selected the same way. Several different ways to earn entries (some can be done daily). Prize will be fulfilled by sponsor. One prize per household. Not liable for unclaimed prizes or fulfillment. Good luck!