Yesterday was my son’s 12th birthday and I wanted to treat him to something special. Ever since he saw The Blue Man Group in Las Vegas he has become a fan of stage shows. It was two years ago in 2012 that we were watching “America’s Got Talent” and an act called “Lightwire Theater” came on that completely mesmerized me. I was so entranced by their performance that I talked about it for days afterwards. I had never seen anything like it and I wanted to see MORE of it.

So when I found out they were coming to The Segerstrom Center in Santa Ana, CA and was invited to see the show I immediately jumped on it. I didn’t tell my son I had got the tickets as I wanted it to be a surprise for him.  After a delicious lunch at his favorite restaurant Salata we headed over to the Samueli Theater. I told him where we were going as we were getting out of the car and he was happy.

When we arrived at the Theater they had face painting and pencil sketching stations for the kids. The Name of The Show was called” The Ugly Duckling & The Tortoise and The Hare” so they had all kinds of fun duck and rabbit merchandise to buy.  Finally It was time to go to our seats. It was stadium seating with comfortable padded chairs and we sat in a great location. The entire show takes place in pitch black dark due to electroluminescent light wires and the lights do not come up during the entire performance. 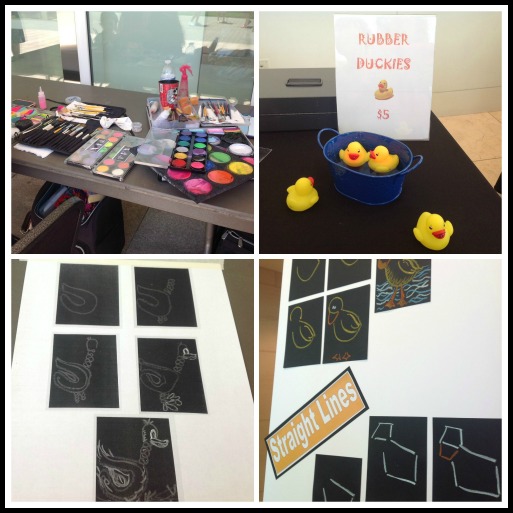 It starts with The Tortoise being Ridiculed by the Hare and The Tortoise challenging him to a race. They set off and the Hare takes a commanding lead right away. Thinking he will win easily the Hare allows himself to be distracted with many modern-day activities; texting, video games and the paparazzi, of course. There were so many funny moments while the Hare was distracted. They played some really hip songs like “I’m too sexy” and MC Hammers “You can’t touch this” while the Hare danced around and took selfies of himself. You could hear so much laughter coming from the audience. Eventually The Tortoise continues to trudge along at his methodical pace and, despite the fact that the Hare is a swifter creature, The tortoise wins the race due to his discipline and fortitude.

I was amazed at some of the special effects in this performance.  The way they combined the sound effects with the lights was really amazing.When the Hare would run really fast the lights would leave a trail like he took off at light speed.

Next it was time for “The Ugly Duckling”. This was such a touching performance (although it also had some funny parts) and I really felt like everyone could relate to at least once of the characters. You just can’t believe how intricate the costumes are. Since you can only see the electroluminescent wires but you know that there is a human in there controlling the movements, your mind really creates an awesome visual effect for you. The limbs on the cat are hinged so it looks like it is really walking. The mama duck was full of charisma and emotion all at the same time and the worm was just a really funny segway. All of the characters had great dance moves but my favorite part was when they threw in some Matrix moves. It was amazing and I still don’t know how they did it.

My son really enjoyed the show and before we even got back to our car he was asking if they had any other performances we could go see.

How Does Lightwire Theater bring their show to life?

Through art, science and technology the characters in Lightwire Theater  come to life.

For more information and to see when Lightwire is coming to your town visit Lightwire Theater on Facebook or on Twitter.