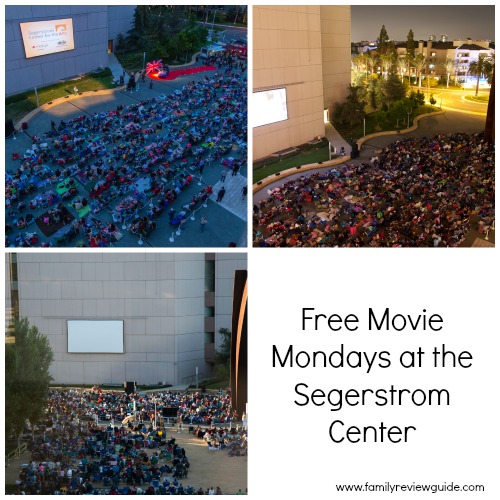 Watch a movie under the stars at The Segerstrom Center  in Costa Mesa. Movie Mondays is happening this July and August with classic movies like Little Shop of Horrors and the Sandlot. Bring a blanket and some popcorn (or some dinner) and make some fun memories.

As the winner of this year’s Audience Fan Favorite Poll, Grease fans are “hopelessly devoted” to this classic movie musical! Travel back to the 1950s and sing-a-long as John Travolta and Olivia Newton-John star in the biggest movie musical of all time.

Selena Quintanilla was a major figure in Tejano music, a Grammy-winning recording artist, a beloved star in the American Southwest and Mexico, and seemed poised to cross over into mainstream popularity on the U.S. pop charts. In this biographical drama, Jennifer Lopez portrays the popular Texas-born Tejano singer with a long string of successes on the Latin charts.

Come celebrate Christmas in July with Buddy the Elf as he travels to New York City in search of his biological father (James Caan), spreading Christmas cheer along the way. As a human raised by elves and living in the North Pole, Buddy (Will Ferrell) can’t shake the feeling he doesn’t fit in with his fellow toy-making elves. Elf is a spirited, good-natured family comedy full of holiday spirit and Yuletide cheer.

It’s a 30 year celebration as Segerstrom Center and Ferris Bueller both made their debut in 1986! This American comedy from John Hughes follows a high school senior, Ferris Bueller (Matthew Broderick), who skips school with his girlfriend Sloane (Mia Sara) and best friend Cameron (Alan Ruck) on a one-day journey through the streets of Chicago.

Fifteen-year-old Sarah resents her little brother and secretly wishes he would disappear. Her wish comes true when goblins kidnap the boy. To rescue her brother, she must sneak into the castle of the Goblin King, which is in the center of a fantastical labyrinth. But, the task is easier said than done, for the maze is filled with strange creatures and mind-bending puzzles, and nothing is really as it seems. George Lucas produced and Jim Henson directed this gothic fantasy that pits living and breathing actors Jennifer Connelly and David Bowie against a motley collection of Muppet monsters.